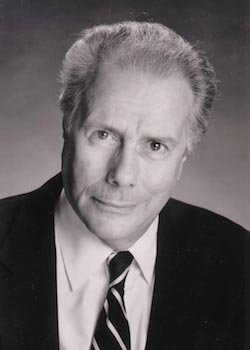 With heavy heart we announce the passing of Henry G. Miller, Senior Partner of the law firm of Clark, Gagliardi & Miller, P.C.

Henry was the son of the late Henry A. and Anne Withers Miller. He was born in Brooklyn, New York on February 18, 1931. Henry was predeceased by his wife, Helena McCarty Miller. He is survived by his five children and ten grandchildren: Jennifer and John Rand and their children, Michelle, Steven, Paul and Lucas; Henry and Elizabeth Miller and Henry’s children, Emmet and Healey; Matthew and Julie Miller and their children, Michael, Tyler, Ryan and Kayla; Margaret Miller; and Anna Miller and her mother, Dawn Baker Miller. His brother, Robert Miller, also survives.

Henry G. Miller, a graduate of St. John's College (1952) and St. John's Law School (1959), was Past President of both the Westchester County Bar Association and the New York State Bar Association. He was a Past Regent of the American College of Trial Lawyers, a Past Director of the International Academy of Trial Lawyers and a Fellow of both the American and New York Bar Foundations and a Past Director of the New York State Trial Lawyers Association. At the time of his death, Henry was the senior member of the White Plains, New York law firm of Clark, Gagliardi & Miller, P.C.

Henry was a member of the Board of Directors at Greater New York Insurance Company and a Trustee Emeritus of Pace University. He enjoyed sharing his knowledge of the law by giving continuing legal education programs for the New York State Bar Association and many other organizations. He was a past columnist for the New York Law Journal and the author of many legal texts, including his book, “On Trial – Lessons from a Lifetime in the Courtroom”.

Along with his family and the law, Henry had a deep affection for the theater. He studied acting with Stella Adler and wrote and performed many of his own plays. He performed his one-man show, “All Too Human”, about the life of Clarence Darrow, off Broadway at the 45th Street Theatre and originally at the White Plains Performing Arts Center, of which he was a member of the Board.

Henry leaves behind a host of dear friends and colleagues who will remember his quick wit and sage advice. He will be missed.